The duodenal switch is a combination of the gastric sleeve and the gastric bypass. The biliopancreatic diversion with duodenal switch, commonly referred to as the duodenal switch (DS), statistically has the best overall weight loss results despite the frequency at which it is performed.  On average, patients routinely lose 80% of their excess weight and in many cases, closer to 100%.

How the Duodenal Switch Works

Ultimately, the duodenal switch removes part of the stomach and significantly shortens the small bowel from a digestive/absorptive standpoint.  This results in smaller portions of food consumed and faster movement of those portions through your digestion system. 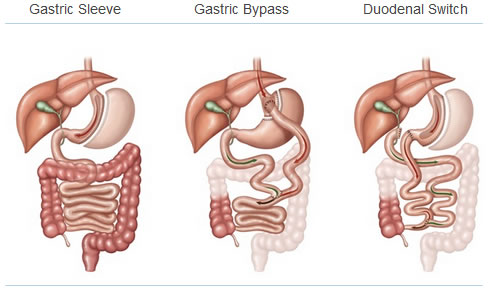 More specifically, in this altered anatomy, food travels down the “new” portion of the stomach and enters the small intestinal segment called the ileum (the alimentary/enteric limb).  Digestive juices are then released from the liver and the pancreas, traveling down the pancreaticobiliary limb. The food and the digestive juices meet about 5 feet from the colon and are absorbed within the common channel.

In a similar manner to the gastric bypass, the small intestine is also shortened in the DS (however much shorter then the bypass), therefore there is less absorption of nutrients. Duodenal switch patients may experience greater changes in mineral deficiencies and bowel function compared to a gastric bypass patient. Therefore it is extremely important for these patients to get adequate nutritional intake in the form of protein and nutritional supplements to ensure they are receiving the appropriate amount of vitamins and minerals to sustain a healthy lifestyle.

Unlike the gastric bypass, which the small intestine is shortened by about 25 – 30%, the duodenal switch bypasses in excess of 75% of the small intestines absorptive capacity.  As a result of this, the duodenal switch is considered a malabsorptive operation, which makes the likelihood of nutritional deficiencies and changes in bowel function much higher. Because of these extreme alterations to the body’s method of digestion, our practice mostly reserves the duodenal switch for our patients who have a much higher body mass index, usually 55 or higher. Although this operation can be performed on lower body mass indexes, patients who have the sleeve gastrectomy or the gastric bypass can still expect a significant amount of weight loss with a lower nutritional risk.

How the Duodenal Switch Helps with Weight Loss

Traditionally, surgeons would claim that weight loss surgery was effective because it resulted in eating less (restriction) and absorbing fewer calories (malabsorption). Although this is true, there are more important mechanisms as to why patients lose weight following bariatric surgeries.

Based on current research, physicians and educators believe that weight loss as a part of a duodenal switch and gastric bypass surgery is a result of bypassing the duodenum coupled with changes in a patient’s hormone levels. Indirect evidence of these hormonal changes has been recorded as a result of most gastric bypass patients with diabetes now having normal glucose control (cure of the diabetes) prior to even losing weight.

To learn more about the duodenal switch or other bariatric procedures, watch our free online seminar or schedule a consultation with our bariatric team.

Older Post What to Expect At Your Gastroenterology Appointment
Newer Post Bariatric Surgery: The Gastric Sleeve vs. The Duodenal Switch

Choosing the Best Bariatric Surgery Procedure for Your Health

Bariatric Surgery: The Gastric Sleeve vs. The Duodenal Switch